Do you have a Golden Retriever that is high energy and ball obsessed? Then read on! Because flyball may be the dog sport you are looking for.  This is a high-speed canine sport that is great for burning off extra energy.

A dog is at the start line. Before him lies 51-feet with four hurdles, beyond that a spring-loaded box with a ball. As soon as he is cued to start he races off over the hurdles. He presses the spring box to release the ball, snatches the ball, and races back over the hurdles with it. Just as he goes over the finish line one of his teammates shoots off to do the same thing. This super fast-paced relay race for dogs is called flyball.

The flyball team consists of four dogs with four handlers. A team can have up to six dogs with two as backups. The team also needs a human to be the box loader, they will place the balls in the spring-loaded box for the dogs to release. A team will often also have a person or two to chase any balls that might escape. 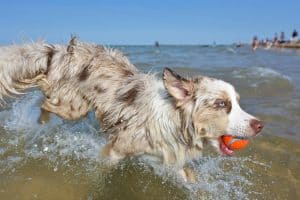 When a team comes to a tournament they are expected to bring their own balls and flyball box. This is helpful because then each dog on the team can be trained with the same box. They will also get to use balls that are the right size for them and that they are familiar with.

Because this is a tournament-style competition one team competes against another. With their dogs running parallel lines of jumps. It is incredible to watch! Ideally, as each dog crosses the finish line one of the dogs on their team is right there charging across the start line. So, they meet nose to nose as they cross the start/finish line.

Typically the tournaments are done between teams of similar speeds. Usually, the winner will be the team who runs the fastest in 3 of 5 heats. This means that the dogs get to do a lot of running! Often times a team will win by a matter of milliseconds.

Who Can Play Flyball?

Flyball is open to all dogs! Any breed of dog or mixed breed is welcome to play flyball. Also, any dog that is 15+ months can play.

The ideal candidate for flyball is a dog who can pay attention to his owner in highly-arousing situations. The ideal candidate also has excellent recall, is smart, energetic, and fast. Of course, a love of balls is very beneficial!

Running, jumping, catching, and hanging out with other dogs, it’s all part of flyball. This makes flyball an excellent mental and physical workout for your dog! As with all canine sports, when done right, flyball is a great way to increase your bond with your dog.

Can You Earn Titles?

Like most well known canine sports you can earn titles in flyball. The dogs are able to earn points based on how quickly they complete their part of the heat. Dogs are given points on an individual basis and not as a team. But it takes the team to win the tournament!

Flyball can be a super fun way to burn tons of energy for your Golden Retriever. The best way to learn more about flyball is to find a class or a local club. They will help you with training and you might even find the perfect team to be a part of!