With the arrival of summer unfortunately are witnessing the arrival of many seasonal diseases, one of them is the heartworm. This disease is so widespread that in some areas of the world is considered endemic.

Heartworm is a disease caused by a parasite, Dirofilaria immitis, which can be transmitted by several species of mosquitos. 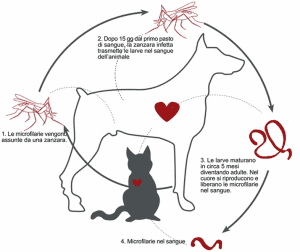 How is it transmitted?

The worm lives in the heart of the dog (pulmonary artery and right ventricle). After mating, the microworms are generated from these parasites are entered into the bloodstream. These larvae are ingested, during a blood meal,by female mosquitoes and the mosquito itself undergo two moults, thus becoming infectious.

Infectious larva is transmitted by the mosquito at the same dog or to another via blood meal. The larva undergoes a further mutates into the skin of the dog, in the FAT or muscle tissue, immature adults following the bloodstream arrive in the heart of the dog where they stabilize.

What symptoms can have your dog?

The symptoms depend on the severity of infestation and usually depend on the damage caused by the larvae on the cardiovascular system. The majority of dogs with pulmonary heartworm cardio is asymptomatic but in some cases can be observed:

There is a medical therapy for the heartworm disease that still involves risks related to the massive death of the parasites.

The BEST THING is prevention

Prevention begins with the preparation of the environment, if your dog lives in the House is good to buy mosquito nets, if he lives in the garden do not leave stagnant water sources (like water in saucers etc..). We avoid the walks in the morning and the afternoon until 18.30/19.00 (at the times where the number of mosquitoes present is greater).

Secondly we can make prevention using special substances that serve to prevent mosquito bite on your dog (spot on or collars).

Third, during the time in which the mosquitoes are active we can administer or one tablet (monthly) or to administer a drug to the vet (annual slow release) that in itself doesn't prevent the dog's contract with the parasite, but kills any microfilariae inoculated from infected mosquitoes, preventing him to transform into immature adults and migrate to the heart.