Home » Dog's World » The History of the Golden Retriever

Dogs have been around for thousands of years. Most retrievers started in European countries. They were bred by aristocrats that wanted to use the dogs for hunting purposes. Mostly a breed would start with an idea. A dog to hunt in the marshes or a dog to hunt the moors or a dog who can retrieve from the water.

Once the idea was set these aristocrats started selective breeding. Breeding together dogs from their kneels that had the qualities the hunters were looking for. This selective breeding created all sorts of sizes, coat types, coat colors, and temperaments of dogs.

These dogs became breeds but none were really recognized until the 1800s when kennel clubs were created. These clubs worked to create specific standards for each of the breeds. This helped to categorize breeds and keep them true to their original intent. 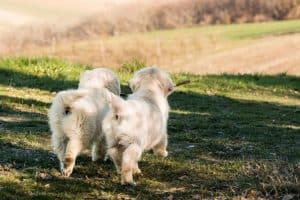 Where Does the Golden Retriever Fit In?

The aristocrat responsible for Golden Retrievers was the first Lord of Tweedmouth, Dudley Majoribanks. He developed the breed in the Scottish highlands during the reign of Queen Victoria.

Tweedmouth wanted a dog who was excellent for the rugged terrain and rainy climate of his home in Scottland. Of course, the dog also had to be an excellent retriever for hunting. Tweedmouth wanted to create a breed that was good in the home as well with a gentle and sweet temperament.

He kept copious breeding records from 1840-1890. These records showed traits of the parents and then what the puppies were like. Building a knowledge base for him to work with.

He crossed the "yellow retriever" with the Tweed Water Spaniel (a now extinct breed) and also threw in some Irish Setter and Bloodhound, Springer Spaniel, Newfoundland, and others.

Golden Retrievers, when first registered at a kennel club, were called Gloden Flat-Coats. In 1911 the name was changed to Golden Retriever. The Golden Retriever Club of England was formed in 1913. The breed was first recognized by the American Kennel Club in 1925.

Golden Retrievers were first shown in 1908 and started to arrive in the USA around that same time. The breed quickly became a favorite. Hunters loved the functionality of the breed, show-goers loved the style and beauty, and the sweet temperament was loved by all.

The breed has been popular in the States since its arrival. The Goldens popularity soared in the 1970s with President Gerald Ford and his Golden, Liberty. A Golden Retriever was also in the White House with Ronald Ragen.

In the first Obedience trials of the 1970s, Golden Retrievers won the first three shows. Again sealing their popularity.

Goldens have been popular to use in movies and TV shows as well. Think Air Bud and assorted Buddy movies, Punky Brewster, Sue Thomas FBI, and Full House. Golden Retrievers in these shows showed them as iconic family dogs and assistant dogs.

Golden Retrievers originated in Scotland and were brought into being by Lord Tweedmouth. Golden Retrievers were bred to be excellent hunting dogs able to handle rainy climate and to be sweet and gentle in the home. They have been popular in the USA since their introduction and are very likely to stay popular.