Home » Dog's World » Do you feel justice has been done for “ANGELO”?

A year and four months of imprisonment was imposed on sentenced four young boys accused of killing the dog “Angelo” on 24 June 2016, the maximum sentence. "Angeol" was a stray dog… he lived in Sangineto in the province of Cosenza, Italy. He was tortured to death and they have recorded everything with a smartphone and have uploaded the video on the internet.

Almost a year later came the judgment of the Court of Paola: the four protagonists, Giuseppe Liparoto, Nicholas Fusaro e Francesco e Luca Bonanata were sentenced to one year and four months each.

The four, however, despite being found guilty, they will not pass one day in jail. Their punishment was suspended because it had never been accused of anything in the past

Riccardo Manca, leader of the  Italian animal rights association, expresses great satisfaction with the sentence: "for the first time - he said - is applied in our country the maximum sentence for the torture and killing of animals. Angelo, defenseless and helpless creature, finally had his justice ".

Also Stefano Fuccelli, president of the european animal rights activists declares: "Angelo has accomplished a feat never seen before, he was able to involve and unite the whole public to ask loudly specific punishments against animals crimes. The judgment of the magistrate was impeccable, he couldn't do more, he had his hands tied by a law inadequate and unfair ".

According to Fuccelli, as long as will not change the regulations no “Angelo” will have justice and other “Angelo” will continue to be brutally tortured for fun or out of boredom.

Even Michela Vittoria Brambilla, President of the animal rights movement and of the Italian defense of animals and the environment, focused on the need to have more severe penalties: "who mistreats and kills animals must go to jail". 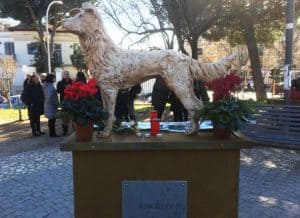 In honor of Angelo and what he represents has also been opened on 21 January in Rome in Ravizza Park neighborhood a statue dedicated to him, on the initiative of some volunteers and of the Association "La Vela d'Oro" who collected the funds to carry out the handiwork of bronze of Alessandro Di Cola.