Home » Dog's World » DENMARK HAS GRACED ICEBERG, THE DOG WILL RETURN TO ITALY

This is the story of Iceberg, female dogo argentino of 2 years probably unaware of tam-tam media in recent days has turned around. Let's take a small step back ...

Giuseppe Perna from Avellino, Italian chef like many young jobseekers, decided a few months ago to emigrate to Denmark. Despite many difficulties that a change of this type understandably causes emotional, not completely lose her references decided to bring his entire family. The work finds him, his girlfriend is expecting a baby and its inevitable companion, the dogo Iceberg, inevitable companion in life, gives those moments of lightheartedness that only those who have a dog can include.

One day in May this year, walking through the streets happens the unexpected; A trivial quarrel between two dogs, a person who gets in the way in an attempt to separate them and a report that speaks of "flesh wound of 3 mm".

From this episode someone notices the dog and reports it and after a few days the police show up at home, bringing it immediately in State kennels in Copenhagen. But how and especially why this happened?

Unfortunately what our friends don't know is that in Denmark there is a Breed Specific Leigislation, a real black list of breeds considered potentially dangerous to man and therefore forbidden to possess, under penalty of seizure and suppression.

Giuseppe collapses the world on him, he didn't know about the existence of such a ban that denies permission to certain dogs to travel freely to Europe. But certainly the law does not admit ignorance, the affair takes almost paradoxical because Iceberg, with the documentation perfectly fulfilled, had passed customs controls without any difficulty.

Mobilizes the Danish Association Fair Dog, and soon the ENPA spreads the news, starts collecting signatures and the site of the Embassy is under attack for what is considered an injustice, by virtue of the fact that the airport could warn our compatriot.

All this mobilisation has produced its effects, moved the politics and some familiar faces from the world of entertainment, a delegation of ENPA, with Greens and other animal welfare organizations, is received by Danish Ambassador to deliver 340,000 signatures asking for the return home of the dog by stopping so this needless death sentence without any judgment.

The Minister for the environment and food policy, Esben Lunde Larsen, in his facebook page has finally taken a stand in favor of each other and so, yesterday's news (June 28, 2017), our friend Finally she can return in Italy. Here it is in a picture our Iceberg with its human! Unaware of what has been done and said, and perhaps after all ... better that way! 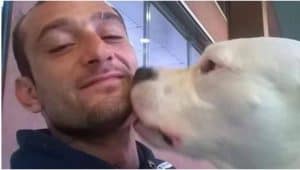