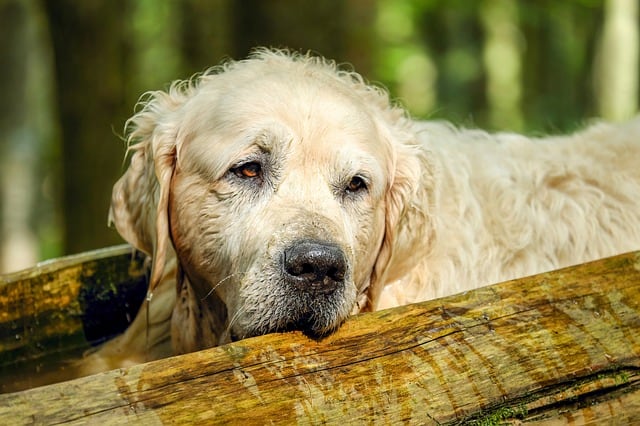 One of the most popular choice for house pet, golden retrievers are famously bred for and hallmarked by their gentleness, friendliness, confidence and the indisputable cuteness. Like any animal, however, this handsome breed of doggie bites. Sometimes. Rarely.

In fact, the golden retriever breed was originally intended for the nobles and royalties as a hunting companion. Because of their soft mouth, they have a distinguished ability to retrieve hunted games undamaged, hence the “retriever” in its name. As a companion breed intended for the higher societies, it is no surprise that it is, by nature, temperate.

Golden retrievers are so friendly to familiar people and strangers alike that Canada’s Guide to Dogs advises against using these cute guys as guard dogs. All these above were retrieved from guides to golden retriever breeding standards, and you might ask: But are golden retrievers actually aggressive, despite the guides?

Perceived aggressiveness could be out of fear

There’s an old, ubiquitous saying applied to militaries around the world: “The best defence is a good offence.” This saying, as it turns out, not only applies to warfare, but may also apply to animals—in our case, to golden retrievers.

As pointed out by RetrieversHub, in all breeds of dogs, there are different types of aggression, among which is fear aggression, an instinctive response when dogs are afraid. Ever seen your dog barking at lightning like there’s no tomorrow? That’s what we’re talking about.

Some common stimulants of fear include lightning, fireworks, loud noises, etc. You get the gist. Some of these stimuli are ones we humans have grown used to, but they are more ingrained in our best friends. So if you observed aggression in your golden retriever, look around: Is there anything happening that might be overly stimulating?

Aggression as self-defence when in pain

Along the same line as aggressing out of fear, even the temperate golden retrievers possess self-defensive instincts when they’re in pain. The basic reasoning behind such aggression is something like: “Stay away from my wounds, or I’ll bite.”

This type of pain-induced aggression can be clearly distinguished from other types of aggression by the display of a defensive bodily posture while barking or biting when getting too close, as a team of researchers found in 2012.

They also found that this was especially true for dogs that are not aggressive before they were in pain. Golden retrievers certainly falls under this category. The pain can only go away as the injury heals while being managed with meds if necessary, but by providing your retrievers with a comfortable environment and keeping them in warm company, they will feel comforted, less need to be aggressive.

Another reason for aggression in golden retrievers is the inability to find mates or to mate with a compatible female or encountering competition—in other words, sexual frustration. Yes, sounds Freudian, but it’s true…sort of.

In a 1983 study, researchers found that both castrated males and splayed females are less likely to exhibit aggression compared to their sexually-intact counterparts. But it is also noteworthy that this difference is not big enough to warrant generalizing to all dogs; it’s only sufficient to warrant keeping an extra eye on your golden retrievers for any indications that they might be frustrated sexually.

For example, does your doggie act particularly excited around other dogs of the opposite sex? Does he/her appear to want to mount things? If you suspect but aren’t sure, consult your vet.

But if we observe aggressive behaviors in our golden retrievers when there’s nothing around except a friendly neighbor, certain that means bona fide aggression? Not necessarily. According to the trainers at Montreal Dog Blog, and numerous other sources, if a golden pup wasn’t socialized properly through play, their natural play instinct carries over into adulthood.

Although it may sound innocuous, but as with human babies and grownups, what may be acceptable as play as a pup might come off as aggressive as a grown dog. For one thing, their sheer strength would have increased as they grew. The same actions that were fun as a pup might be harmful as an adult dog.

For another, golden retrievers are a very social species, and play is important for them at all ages. So if they feel like there’s not enough activities to bond with you over, they might get frustrated and start to spend that extra energy on activities that might be perceived as aggression, such as heightened excitability, biting things, breaking things, chasing, etc.

Remember, golden retrievers were bred originally to accompany hunting trips. That said, even though it is important to start training your retrievers through playing as a pup, it is never too late to start, even with a full-grown adult. Some recommended play-exercises for your retrievers include running with them, fetch, and playing in waters, because these fluffy companions love the water.

Could it be trauma?

One last possible cause of aggression is related to aggression of fear and self-defence varieties. Sadly, animal abusers do exist, and if you adopted your golden retriever not as a new pup, and your golden retriever that is supposed to be friendly to everyone—even strangers—by nature appears to be afraid of people and aggressive, consider the possibility of past traumatic experiences.

Ask a Trainer by Montreal Dog Blog provides many good advices for helping your retriever heal and grow. It is recommended that you give your doggie some jobs to accomplish and challenges to overcome on a daily basis. Nothing too crazy, since these activities are supposed to help your dog rebuild their confidence. And certainly keep the play active and fun!

Again, retrievers are still social by nature, so it might also be a good idea to still take them out from time to time. When you take your retriever for a walk, however, try to do it in a structured way that’s led by you.

By extension, try to avoid dog parks because they are pretty far from being structured. It’s fine to meet new dogs even if your retriever’s still afraid and on defence, but it has to be in a controlled and calm environment where your retriever might feel safe.

The same goes for meeting new people: controlled, safe, structured. Don’t be shy to tell your friends and family how to approach and interact with your frightened retriever.

Some tips the Trainer provided: slow movements, straightened back (arched ones aren’t a good sign in the animal world), don’t bend over your dog, etc. But perhaps the most important of all: Let the dog control if and when to have physical contact; let the retriever do the initiating of touch.

Finally, perhaps equally important is to keep calm yourself. We’ve all heard that our pets feed off from our energy. How can your retriever rebuild confidence and trust towards others if you, the person whom it now relies on, are anxious? Even if you’re nervous, don’t avoid other people and dogs, but approach calmly; act like you’re in control.

So, what is the truth about aggression in golden retrievers? The short answer: Yes, they can be aggressive. The more sophisticated answer: No, they are not of an aggressive nature, but if we don’t take care of them and satisfy the needs important to them, they will get frustrated and the frustration might come off as aggressive.

Although there are aggressive golden retrievers that’s a result of irresponsible breeding, that probability is very low (98% non-aggressive). That is, if your golden is being aggressive, there is a concrete and identifiable root which can be fixed.

As you may have seen already, in order to help your retriever with any behavior problems, you first need to know how to identify them. It goes without saying that as a responsible owner of a golden retriever, it is the best practice to educate yourself about the breed’s unique needs and usual patterns of behaviour.

As we’ve discussed, knowledge about animal behavior is particularly important when your fluffy friend is experiencing trauma, since any wrong action might send it into fright. Golden retrievers are wonderfully friendly and loyal companions that are always there for us. But when these big warm fluffs struggle, even if they seem aggressive, it’s their turn to rely on us.