Home » Sport and Canine Activities » Retrieving and the Golden Retrievers 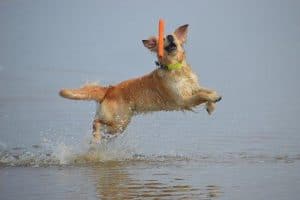 In fact, the modern field-bred Goldens can have red or even buff feathers. The dogs have long wavy thick coats with an inner layer for insulation which comes in handy for winter---the Duck hunting season. They also are better classified as working dogs.