Seizures in dogs are often impressive! Dogs that drools, shakes and loses consciousness? Do not panic, stay calm and follow our advice to better understand the symptoms, causes, and treatments to put in place.

To begin, we must distinguish between epilepsy convulsions in general. Indeed, one of the major symptoms of epilepsy is actually seizures. But not all convulsions are due to epilepsy in the strict sense of the term.

The first seizures during epilepsy occur most often between the ages of 6 months and 5 years, but the first attacks can go unnoticed and animals can be presented to their veterinarian after the age of 6 years.

Seizures in themselves can be very varied in nature: they can be generalized within the most classic case an animal that falls to the side, unconscious and has pedaling movements or is partial, without loss of consciousness.

The symptoms of epilepsy

The dog epilepsy is a fairly common disease in some breeds such as the golden retriever, the poodle or the Labrador.

It is a nervous disease that evolves over time and whose first crises may go unnoticed. But the frequency of crises tends to increase as the years go by. During seizures, the manifestations may vary from dog to dog. But, in general, the dog falls to one side, starts to tremble or pedal, saliva, makes his needs under him. So it's very notable but it often does not last very long.

What to do during the crisis? Especially do not panic! And, easy to say ... do nothing! The crises do not last long. Do not try to wake your dog if he has lost consciousness, or hold his mouth or tongue, you could be bitten! Just watch out for him not to hurt himself. 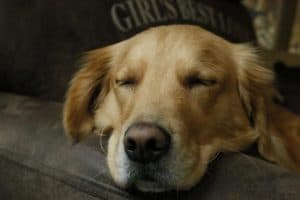 An epileptic seizure breaks down into several stages:

- Prodromes: They take place during a more or less long period (going from a few hours to a few days) before a crisis and can be manifested by anxiety or agitation. It often happens that this step is not identified by the owners and goes unnoticed.

- The aura: It is the sensation, rather subjective, that the animal feels a few seconds to a few minutes before there are visible symptoms. This phase is caused by the appearance of abnormal electrical activity in the brain. In an animal, the aura phase is often manifested by isolation or the animal remains stuck to its owner, agitation, and vomiting just before the seizure.

- The Ictus: It's the epileptic fit in itself.

- The post-ictal phase: It is due to transient abnormalities of brain function caused by convulsions. It usually lasts from a few minutes to a few hours and can be manifested by disorientation, blindness, ataxia and very deep sleep.

- Seizures often occur when the animal is sleeping or resting. They can appear quite spontaneously or be triggered by certain stimuli such as sound.

The diagnosis of essential epilepsy is based on the elimination of other causes because there is really no other way to diagnose it.

The veterinarian will, therefore, examine your dog, will certainly do some additional tests (blood test and blood tests, x-ray, cerebrospinal fluid puncture, possible scanner), but most importantly, he will ask you about the crises affecting your animal.

The treatment of epilepsy

Seizures can be dangerous for the animal because the brain suffers from each crisis and these crises tire the dog. In addition, the dog may be injured if no one is next to him to watch him.

The treatment of essential epilepsy is therefore possible. The treatment consists of the administration of drops or tablets all the life of the animal, every day. Most often, barbiturates are prescribed.

The nature of the treatment depends on the frequency of attacks, their intensity, and their duration.

However, it is best to follow the advice of your vet. The patient may decide whether or not to put the animal under treatment and he may want to wait until the seizures are more frequent before starting a treatment.

Indeed, the treatment must be administered regularly and like any long-term treatment, it may have certain disadvantages. Regular monitoring helps to dose the drug in the blood because the dosage depends greatly on one dog to another, and it also changes over time.

Once the dosage is adjusted, nothing changes as long as the dog is well or has only mild seizures. It is up to the veterinarian, depending on the dog's condition, to decide on a change in treatment.

The ideal would be to place it in a quiet room, not too bright and without objects around that could cause injury during the crisis. Depending on what has been prescribed by the veterinarian, an anticonvulsant drug may be injected when there is evidence that an epileptic seizure is imminent.

With experience, when we think that a crisis will occur, it is important to reassure the dog by caressing him and talking to him.

Conclusively, if the diagnosis of epilepsy is confirmed, and the seizures are rare, it is a disease compatible with a near-normal life of the dog. If seizures are too frequent, drug treatment can curb the onset of these crises and allows to lead the dog also an ordinary life.