Home » Dog's World » Why Does My Golden Retriever Chase Cats?

We all know that dogs like to chase cats around.

You might have seen it in cartoons, movies, and all over the internet as it makes for viral material.

Have your ever wondered why your Golden Retriever likes to chase cats around? Most people feel that dogs don’t along with cats and vice versa. However, the internet is also full of photos of dogs and cats cuddling so, we know that cats and dogs aren’t mortal enemies.

So, what’s all this chasing around for?

In this blog post, we will answer the question, “Why do dogs chase cats?” in as much detail as we possibly can.

Golden Retrievers are friendly dogs that get along well with kids and other animals. However, these dogs are bred to retrieve game which is one of the reasons why this breed became popular in the first place.

You’ll find differences in almost every purebred and mixed breed dog; some will chase cats, some won’t.

So, it is mainly the Golden Retrievers that were bred to hunt that usually chase around cats as they have a stronger drive to do so.

As we mentioned in the earlier section of this blog post, Golden Retrievers were bred to retriever fowl from water as well as land. These dogs were also popular because they made excellent companions for hunters and their families. 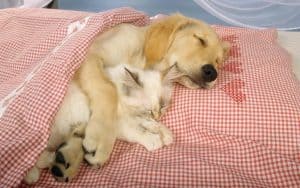 However, the hunting instinct isn’t something that you can completely wipe off from your dog’s memories.

The instinct that our domestic dogs inherited from their wolf ancestors is their prey drive.

This drive was necessary in the wild so a wolf pack could survive. A mother wolf hunts to feed her pups, and the pack hunts for survival of the fittest pups in the pack, as they are the future of the pack’s longevity.

It is the reminiscents of this prey drive that cause a lone wolf to hunt anything smaller than itself.

If a dog grows up with cats, while they may chase when playing with their feline roommate, they are not as apt to actively chase cats all the time. They may also defend their joint territory against strange cats that intrude in your yard.

Did you know that a majority of people living in the United States actually prefer dogs over cats?

If you wish to get a cat along with your Golden Retriever and want them to get along just fine so that you can post pictures of them cuddling on the Internet, you should introduce them carefully.

It is easier if one or both of them are young.

We say that you should introduce them young because in that case they don’t really have any preconceptions of what the other species is capable of. So, dogs don’t know that cats can scratch them and cats don’t know that dogs are hyper.

If you are planning on bringing a new kitty home, a good way to introduce them is to crate your kitten and bring the Golden Retriever into the room the crate is in.

You still want to be nearby watching the interaction and have treats and praise on hand for both your Golden Retriever and kitten.

If your dog barks or the cat growls, admonish them but do not punish them! They are just reacting to a new situation.

If they behave well, praise them and offer treats to both. By using this method, your dog and cat can get used to the sight of each other without being able to reach each other.

The next step is to let them interact in a room under your supervision.

Make sure the room you choose has an escape route for your dog and also ensure that your cat’s nails are trimmed before the encounter. A friendly swat on the nose is one thing, but sharp claws may make your Golden Retriever rethink the idea of being friends.

Put a collar and leash on your dog and put them on a sit/stay in the room.

Have another family member bring the cat in and put them on the floor near the dog.

If your dog is calm, praise them and offer them a treat for their good behavior. If your dog rushes the cat or tugs on the leash, tell them “no” and put them back on their sit/stay. Repeat both the stages of training several times a day and for the first several months if needed.

Introduce them slowly until they both get the hang of things and always be there to supervise their interaction.

The biggest reason why dogs chase cats is because they have a strong prey instinct and chase anything that’s small.

It’s something they get from their ancestors.

This is true for dogs that belong to hunting breeds like the Labrador Retriever, Golden Retriever, Daschunds, etc.

If you want your dog and cat to get along with each other, it’s better to start while they’re still young. However, keep in mind that not all dogs have a strong hunting instinct and kitties and doggies do make great friends.

Have questions? Leave them in the comments...