Are you thinking of getting a pet dog into the family, or adding an extra one to your pack; then think no other than a Golden Retriever! Here are 10 amazing facts about this excellent breed that will really get you eager to procure one and extend your appreciation.

The golden was well known for its swimming abilities and its readiness to always make a dive into the lake. This led to it being raised as gun dogs mostly used by hunting parties. It could successfully retrieve hunting games such as upland game birds and ducks, undamaged. This was also the reason why they are called "retriever".

The golden retriever has been known to exhibit tremendous emotional reassurance to the sick and elderly, and in peculiar ways motivate patients in ways humans cannot, to carry medical activities that could lead to their quick recovery. They provide a certain feeling of comfort and wellness to patients who are otherwise lonely and lack physical contact.

3. They have a great sense of smell, so carry out search and rescue.

This dog breed is excellent for search and rescue missions. This is due to the tracking abilities and powerful sense of smell, they are excellent sniffers, and they are poised to please their owners. This dog also has an excellent sense of hearing and night vision.

The golden retrievers are known for their great forbearance to pain. Unlike many other dogs, they can bear some level of injuries and still carry out their given tasks successfully. 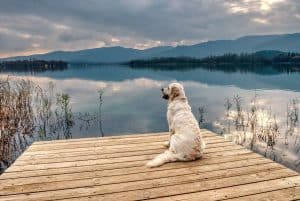 5. They are considered smart 4th smartest in the smart dogs' chart.

The golden retriever is an outstanding breed. Not only for its decent nature and beauty but also in its level of intelligence. It is well coordinated around adults and children, and can successfully carry out various tasks. They tend to be overprotective to children and at the same time accommodates ingenuous games.

6. They can carry fragile things in their mouth and not spoil it.

The golden retrievers have strong jaws and sharp teeth, but, its mouth is actually soft, this makes them qualified to carry things in their mouth without damaging them, like raw eggs and hunting trophies. A golden retriever from Dallas, named Augie, holds the world record for holding the most tennis balls in his mouth (he held a total of 5 tennis balls) without squeezing them.

These are quite a tasking yet unique skill as other dogs may not be able to successfully do these tasks.

7. They're spotted in the White House.

President Gerald Ford and Ronald Regan, both had golden retrievers during their time as the president of the United States. Gerald Ford's golden, which he named Liberty had a live-in trainer in the White House and even gave birth in the White House. Liberty received fan mail that was answered by Ford's daughter Susan. But, as the mails increase, Ford's secretary had to take over the replied, mailing back signed pictures of Liberty and the President to fans (Liberty signed with its paws!)

8. They can easily get depressed when left alone.

Golden retrievers are very emotional and have been known to become depressed or sad when they lose a companion, left alone for long hours, or a decline in the attention which may be caused by bringing in a new pet into the family or having a baby. Though there are no clinically ways of diagnosing depression in your golden, it will surely manifest obvious signs like loss of appetite and decreased energy level.

The oldest golden retriever to have ever lived was 20 years old when he passed away. Here, genetic factors played a large role. But golden retrievers are approximately known to live between 10-12 years.

9. Golden Retrievers have a two-layer coat.

The golden has a double-layered skin. It has an inner layer and outer layer. The inner layered skin which is short and cropped functions as a protective covering for the dog, by keeping it warm through winter and cool in the summer.

The second layer, which is also the outer layer, is slightly wavy, longer and water resistant. This is the layer that needs utmost care. It is recommended that this layer should be brushed every 1 to 2 weeks and bathed once every 6 weeks.

10. They are great actors

The golden are widely known for their easy trainability and adaptation to acting various roles in movies and tv shows. Golden retrievers have been to feature in movies like Air Bud, Homeward Bound, Full House (Comet), and commercials like Duke from Bush’s Baked Beans.