Byron Jones is a resident of Utah. This is a state in the United States of America. Byron decided to go for a drive with his Golden Retriever, named Buddy. They were driving about in a wilderness area in Garfield County, Utah. It was a beautiful day in August.

Byron Jones and Buddy were having a lovely adventure when there was a sudden, freak storm. Byron had to get out of his vehicle in order to close a gate. He left the door of his vehicle open as he went to close the gate.

A stray lightning bolt hit Byron Jones as he closed the gate. The bolt hit him in the back of the head. Byron fell, scorched, immobile, and helpless. 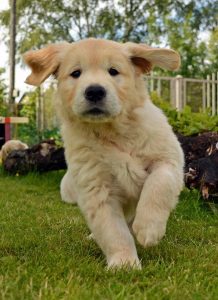 Byron passed out. What happened next is unclear. However, we do know that Byron woke about 2 hours later to see the wagging tail of his dog buddy and human help. Sometime during that 2-hours Buddy had gone for help.

Buddy was smart enough to know what to do. He left the car, probably inspected his owner, and then sought help for his person, Byron. Thankfully Buddy was able to find help for his master.

Buddy and the help he found arrived right in time to be able to get Byron to the hospital. Byron had suffered immense burns, especially to his back and neck. His clothes were burned and shredded.

The help that Buddy found for his master, Byron, took him to the hospital. Byron wound up at the University of Utah’s burn center. The doctors said that he was very lucky to be alive. Byron had to stay at the hospital for a few weeks before he had healed enough to leave the hospital.

Later during an interview, Byron referred to Buddy as his “Goldian” angel. A true statement for sure!

What should you do if you ever get stuck in a freak thunderstorm? It is best to stay indoor in a sturdy building or shelter. This will help to protect you from deadly lightning, large hailstones, high winds, flooding rains, and tornadoes. Thankfully, thunderstorms typically do not last very long and typically will pass through an area in an hour or less.

If you are able to find shelter from the storm so your best to avoid windows and electrical equipment and plumbing. Be sure to bring your pets into the shelter with you to keep them safe as well. If you are able to secure loss objects outside as they may become deadly objects in high winds.

If there is a thunderstorm underway it is best to stay inside and postpone any outdoor activities. You can go outside after the storm is well passed.

If you are like Byron Jones and his Golden Buddy and you get stuck outside in a freak storm take shelter in a sturdy building or hard-topped vehicle. Get to the building or vehicle as quickly as possible. Do your best to avoid open spaces, isolated objects, high ground, and metal objects. All of these can attract lightning.

One thing to remember is that if you can hear thunder, you are close enough to the storm to get hit by lightning. So keep yourself and your dog safe!