Life is about chances some good some bad but all significant in the realm of who we are. Who would have thought one of the greatest loves of my life would come in the form of a four legged clumsy Golden Retriever named Avery Chance. The name actually is so significant I just knew I loved the name Avery and Chance was an easy one for a middle name because it basically meant I am giving a chance on him and him on me. 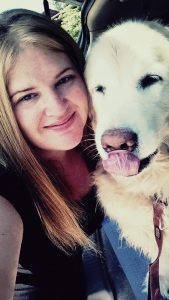 Avery as a puppy was so silly. He would chew my arm and ankle and jump out my car window to get the ducks in the pond. I would have to stop my car in the middle of the road. I would then jump out the car and run after him like some crazy person. Talk about stubborn if Avery didn’t want to do something he would play dead. The Vet had to give him his vaccinations in the lobby because he would do his dead act every single time to avoid shots. The staff would just laugh and call more staff to watch. I secretly thought this was the cutest thing but id act annoyed. In reality as soon as we got back to the car he was showered with a million kisses and some ice-cream treat.

As the years would pass I became scared he would die. I had a golden retriever as a child who passed at five years old. I thought all my life I was the cause of his death. I had just came back from a school field trip where they gave us soap. I remember letting the dog eat one. A week later she got sick and died. I thought the soap I gave killed her. But later found out she was sick from a disease and that’s why she died. But the pain and guilt I felt carried on with me as an adult and I found myself ultra-protective to Avery. I became a helicopter mom.. We were inseparable.

Funny thing about kindred spirits is that it really doesn’t matter if you are a dog or a human because it’s the unity of the two that are bonded in such a unique way. We were souls that were joined and brought together by something divine something spiritual. I say God because that is what I believe when I think of our connection and how we were brought together. Avery’s personality was actually oddly a lot like me. We spent our times on hikes, road trips, the lake and really everywhere. As the years passed our bond was virtually unbreakable.

My life is forever changed and all from this silly Golden Retriever My life presented itself to me in a way I never even imagined it could when Avery became a part of my life. Through God I was given the right to love and raise this silly puppy. He has a soul that God put in his furry little body that was so huge and full of love. I would catch myself just watching him sleep and thanking Gods for life’s blessings. I knew at some point he would have to go back to heaven but I tried to not think about that. I knew Avery was simply lent to me until his time was ready to go back to heaven with the rest of the angels. I knew deep down in his then 13 year old beautiful body it was coming soon. I would watch my best friend who always was smiling and making me laugh begin to slow down. Walking became hard for him. I would find myself carrying him more than he was walking. My Avery had an inoperable huge mass from his chest area to his arm. It was time that I let him go with dignity. When that day came we went to all our favorite spots and I made him eat like a king. When it was time nose to nose together we said our goodbyes. He went peacefully and with one final jester of love he I kissed his nose and he kissed mine. Avery’s beautiful eyes shut and he went home to heaven where he gained his wings.

At the age of 13 years young he was gone. Today as I write this I know he will be the first face I see when we are joined in heaven. We will run to each other and will live for eternity. I learned life is about moments and love. You must respect the love that is brought in your life. Remember a dog loves us more than their self. Love, honor, and cherish your time together for one day it may be gone. I love you Avery Chance. Love Mommy