The place is Strathdownie in West Victoria, Australia. This is where Kerry McKinnon and her husband live with their dogs. One of their dogs, Asha, is a Golden Retriever. Ahsa gave her family a very adorable surprise one morning.

Asha and her furry family members sleep out on the back porch. They have cozy beds there where they sleep. The early morning temperatures of Australia can sometimes get as low as 41F. Which is fine for Asha and furry her siblings.

Kerry recalls that it was early in the morning when her husband called out to her. He had gone to check on the dogs and found something interesting. Something that he wanted to share with Kerry. 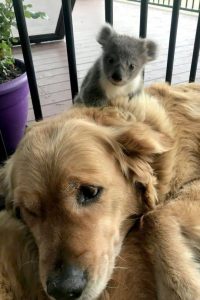 Kerry went out to the porch and, at first, saw nothing out of the ordinary. But then she spotted the baby Koala bear clinging to Asha's fur. Asha reportedly had a "guilty" look on her face and Kerry remembers that the look on her dog's face was hilarious!

That's why Kerry burst out laughing. Asha wasn't sure if she had done something wrong or right. Asha would look back at the Koala and then back at her owners as if to say "can I keep him?" Kerry believes that Asha would have let the little Koala snuggle there as long as he would have liked to.

The baby Koala was young enough that it should have still been with its mother. It is unclear how the little fellow got separated from her. He may have simply fallen out of her pouch during the night.

Somehow the little Koala found his way onto the porch and to the warmth of Asha. It is a good thing he did too. The early morning temperatures of 41F would have been far too cold for the little guy. Additionally, baby Koalas are tasty snacks for predators, like foxes.

Kerry admits that is was difficult to separate the baby Koala from her dog, Asha. The little Koala made a huge fuss. He hissed and cried and clung onto Asha for dear life. He was comfy there and didn't want to leave his new friend. But they needed to remove him so that they could take him to a vet to make sure that he was okay.

Once removed they wrapped the Koala in a blanket and had him checked out by a Koala specializing vet. The little Koala checked out healthy. He was then transferred to a local Koala rehabilitation center.

The center will care for him until he is older. Then they will help him adapt to taking care of himself. Finally, they will release him into the wild.

This friendship is unlikely to have happened anywhere other than Australia. It's too bad that Asha and the little Koala had to be separated but Koalas are a protected animal and no one is allowed to keep them as pets. Of course, it is always good for wild animals to be released into the wild where they can continue to increase the number of their species.