Golden Retrievers are one of the most popular dog breeds in the world.

This intelligent, adorable, and trainable dog breed gained its popularity due to its personality characteristics. So, naturally, the breed has been crossed with several others to create designer dogs.

However, the issue with designer dogs is that you can only make predictions about how they’re going to turn out be but, you can’t be a hundred percent sure about which genes would be more dominant in nature.

So, it is a kind of gamble when it comes to it.

Breed History: A Look at the Parents

The Looks: How Cute is the Golden Retriever Husky Mix!?

The Behavioral Traits of the Golden Retriever Husky Mix

Breed History: A Look at the Parents

As I have mentioned before, the personality, traits, and characteristics are hard to predict with mixed breed dogs. So, it is important to know more about the parent breeds.

Originated in Siberia, Russia this medium-sized dog breed is one of the most popular ones in the modern day. Known to be bred mainly by the hunting and gathering community of the Chukchi people, this herding dog was specifically bred to be able to withstand the harsh cold.

The Siberian Husky is popular for its good looks and comes in a lot of different marking and colors.

These dogs were tasked with pulling heavy weights on sleds in the harsh cold and cover vast distances which required them to have the necessary endurance and strength.

Siberian Huskies are pack animals that enjoy their time with other animals and a big family. These active dogs are known to get destructive if they don’t find the right outlet for their energy.

Large and intelligent, the Golden Retriever is used as a search and rescue dog, gun dog, and detection dog. Golden retrievers are trained to be assistance dogs as they have a loving and gentle nature and love to be around people.

Golden Retrievers have a beautiful and dense coat that sheds heavily, and they love to play in the water.

The Looks: How Cute is the Golden Retriever Husky Mix!?

Since the Golden Retriever Husky Mix is a designer dog, not all of them look totally alike. 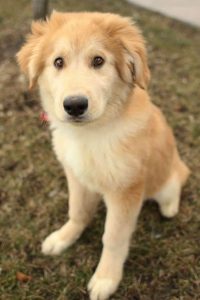 Some Retriever Huskies look more like the Golden Retriever while the others take after the Husky side of the family. So, you can’t be sure how your crossbreed will look like. During puppyhood, most of these looks look similar. As they grow up, their differences get more pronounced.

The Retriever Huskies come in the following colors:

The coat of the Golden Retriever Husky Mix can be either:

It is hard to predict which parent the coat will be similar to until the puppy is about six months in age. While the color of the coat could be similar to that of a Husky’s, the length and shedding could be like that of the Golden Retriever.

The physical features of a designer dog are hard to predict because each and every pup is unique and so, the genes are expressed in a unique manner as well. In fact, no two puppies from the same litter look exactly alike.

The Behavioral Traits of the Goberian

Following are some of the behavioral traits of the Retriever Husky mix:

These mixed breed dogs are known to be very intelligent and catch onto things rather easily as intelligence is a trait both of the parent breeds share. The Golden Retriever Husky Mix is known to be easy to train.

The Golden Retriever Husky Mix is known to be a family dog who likes to show affection by cuddling next to you and is very loyal and loving towards his family---something they’ve inherited from the Golden Retriever side of the family!

These family dogs are known to be excellent with kids as well as other pets and get along rather well with small children. Even though these dogs are excellent with children, make sure that their interaction always supervised because kids and dogs are both unpredictable.

They do well with cats as well. However, they are too excited and full of life so, you need to keep them away from the cat if your cat likes to be alone.

These dogs love to be the center of attention and are very social.

They love to get affection from as many people as possible! This goes hand-in-hand with the fact that they’re great with kids and other small animals. They will make everyone feel comfortable around them and thrive on attention and love.

The Golden Retriever Husky Mix (the Goberian) is a good looking, affectionate, loving, and kind dog who definitely has inherited the best of both worlds.

The thing you need to keep in mind about designer dogs is that you’re just gambling with the genes. This means that you can’t be sure which one of the parents your dog ends up like when it comes to the appearance and other behavioral traits.

Designer dogs are known to be more intelligent and are also resistant to diseases as compared to purebred dogs.

Do you have any questions? Leave them in the comments section, and we will get back to you as soon as we can.