The Galgo, a race few known by most of people, but having very ancient origins that go back to immemorable time. A dog that, thanks to his slender and long-limbed figure, has gone through the centuries, almost running, without changing his appearence and his main characteristics. Traces of Galgo can be found in cave art, from Ancient Egypt to Middle Age, until nowadays, in particular in Spain. 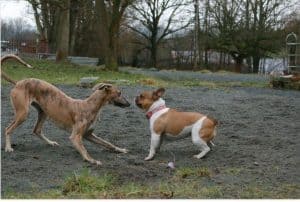 The Spanish Galgo belongs to the family of sighthounds, very fast dogs and skillful hunters, mostly employed for the hares' catch.

Tame, balanced, athletic, having a quite shy nature, these wonderful animals are victims of a real mistreatment and massacre, due to their talents.

Strongly exploited during the hunting season, they are literally "thrown away" like old shoes at its end.

Breeded in a huge quantity, often even more than following the real necessities of a single hunter, only few of them are deemed worthy to survive to the winter and to see the new year, due to a cool economic estimate.

The others? Hung from a tree (considered to bode well!!), thrown in wells or burned alive, because, for some "humans", the life of a Galgo isn't even worth a bullet. The few lucky specimen that are considered valuable are the same treated with little regard, shut in narrow spaces, always undernourished and underweight, because, according to custom, a perennially hungry dog is much more skilled in hunting.

Some of them, simply abandoned, scared and disoriented, are captured and sent, without compliments, to the "perreras". As the spanish law, in case of canine overcrowding, provide for suppression, it's easy to imagine that the stay in these pounds, really isn't a desirable destiny.

Some italian associations (Progetto Galgo Onlus) are acting, trying to bring to light this sad situation: the aim is to save the most possible of them, searching for italian local adopters that could welcome these unlucky friends, saving them from their awful, unwitting, doomed destiny.

Friends for sure, because, if the dog has always befriended the man as a loyal companion, surely he can't be exploited as an object and then tossed in the trash in the name of stupid and cruel customs.

Spread the story of the Spanish Galgo and help him to be who he truly is...a marvellous dog as all the other ones!!