Points of Conformation for Golden Retriever

Dudley Marjoribanks, The first Lord Tweedmouth is the person who introduced this breed. He experimented from 1840 to 1890 to introduce an ideal gundog for Guisachan estate of Highlands in Scotland. Tweedmouth crossed his “Yellow Retriever” with “Tweed Water Spaniel” (now this species has gone extinct), and repeated it for many generations. The first Golden Retriever was seen at a British dog show in 1908. Golden Retriever was first recognized by the AKC in 1925.

Golden Retriever is a versatile breed and could perform well in the hunt of upland game and waterfowl. As they were introduced as Gundogs so, their main function is the same. Other uses include hunting trials, tracking, search, rescue and as a guide dog. They can also be used as a therapy dog. Due to all of this, it is a very popular breed in relative fields.

Golden Retriever as a Guide Dog

A guide dog is a dog that guides blind or partially sighted people outside their houses. A pure breed of Golden Retriever is one of best dog for this work. This is due to size, strength, and intelligence of the Golden Retriever. Due to its gentle behavior and family-friendly temperament, it is liked by many special people.

Golden Retriever as a therapy Dog 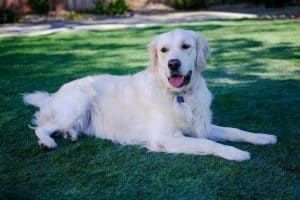 Golden Retriever is a double-coated dog. There is only need of moderate grooming in Golden Retrievers. The double coat of this dog is useful for it in all seasons so, don’t shave it. Combing your dog once a week is more than enough for your Golden Retriever. Combing the dog not only helps it to get the dead hair from out of its coat but also, beautify Golden Retriever. Bathing is also essential for your dog. Along with coat care, trimming of the nails of the dog is also necessary. Trimming nails of dogs make them comfortable.

Despite their family affectionate and friendliness behavior, they are also very energetic dogs. They need a large amount of play daily. Exercise of at least 45 minutes in a day is essential for Golden Retriever. Without this exercise, their body may breakdown which is not good in any sense. You can use different types of exercises for you Golden Retriever like running, swimming, jumping etc.

Due to the high rate of cancer and other issues like inbreeding, the life expectancy of Golden Retriever has been reduced to 10-13 years. Most of Golden Retrievers have the age of 12 years and it is also average life in this breed.

Best age to get a Golden Retriever Puppy

Bite inhibition is also a very important part of its training. It should be thought to a Golden Retriever Puppy properly because it’ll not only helpful for your dog but also, for you in extreme situations.