Adam Stipe purchased a Golden Retriever puppy around 2008. Adam decided to name his pup, Charlie. Through the years Charlie became a hugely important part of Adam's life. Later Adam married his wife Chelsea, and Charlie became a big part of her life as well. Charlie was a companion and friend, and always goofy. 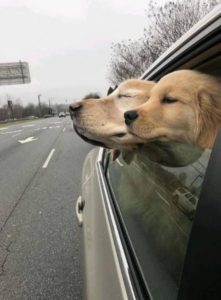 Charlie was not too thrilled with the new furry family member at first. After all, he was managing rather well. Plus, being blind it was a bit difficult to keep track of the lively little Maverick. The Stipes weren't sure at first if adding another puppy to their family was a good idea or not. But the two Golden Retrievers soon warmed up to each other.