On April 24th, 2020, August the Golden Retriever celebrated her 20th birthday! This makes August (Augie for short) the 19th oldest dog, of any breed, according to The Guinness Book of World Records. And the oldest known, and oldest living Golden Retriever.

Augie has a pretty amazing story. She was 14-years-old when she was surrendered to a Nevada animal shelter. Her owner, an older lady, had fallen on hard times and was living in a shelter herself. Unfortunately, the shelter didn’t allow dogs, so the woman was forced to surrender her dog, August.

Jenniffer Hetterscheidt was working in that Nevada shelter as intake director when August was surrendered.  Jenniffer immediately fell in love with Augie. Jenniffer and her husband Steve decided to “forever foster” Augie. August was already 14-years-old so it was unlikely that she would be adopted since she was already old for a Golden Retriever. The Golden’s typical lifespan is 10-12 years.

Once they took Augie home they had her checked by the vet. After bloodwork, the vet found that August had an early stage of kidney failure, stage one of four. Augie, however, was showing few signs of slowing down. 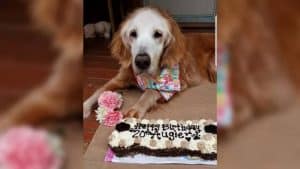 The Hetterscheidts took Augie on many cross-country RV trips, which she loved. They said that Augie loved to spend endless hours at the pool in summer. She was very active and, surprisingly healthy for a 14-year-old Golden.

After a couple of years, Jenniffer and her husband decided to adopt Augie. She was still going strong with no signs of giving up. So, Augie became an official part of their family in 2016.

Augie’s kidney failure has progressed slightly, she is now at stage two of four. She is eating a prescription diet of wet and dry food for her kidneys. She also has a few supplements to help support her kidneys and joints. August also receives subcutaneous fluids twice a week. Other than her kidney issues, a few lumps, bumps, and skin tags she is amazingly healthy for her age.

August is still quite active and enjoys daily walks around the yard. She also still loves to play fetch in the pool. The Hetterscheidts report that Augie is a little shaky when she gets up. She is especially shaky first thing in the morning.

The Hetterscheidts had planned a huge party with 100+ guests for Augie’s 20th. Sadly, they had to cancel it due to the coronavirus pandemic. Still, they celebrated and let August know how much she is loved.

Augie celebrated her 20th birthday with her Golden siblings Belle (7), Bruce (10), and Sherman (also 10). They had a dog-friendly carrot cake to celebrate. Augie’s family says that there is no way to know how long she will live, but they are looking forward to her 21st birthday!