Home » Health » How Long Can My Dog Go Without Pooping?

Has your Golden Retriever been a little backed up lately?

Having a bowel movement once or twice a day---depending on your dog’s metabolism and other physical factors is completely normal and even healthy. Puppies tend to go potty multiple times depending on their age and breed.

However, it’s a cause of concern if your dog hasn’t been regular.

Dog constipation means that your furry friend has been straining to poop and trying to eliminate but, not being able to have a successful bowel movement.

In this blog post, I’ll answer the question, “How long can a dog go without pooping?” and share a few things you need to about it.

So, without further do-do, let’s get started!

Constipation in Goldens: Things Should Know

It’s true; dogs get constipated just like humans do.

Obviously, this isn’t something that you should panic about or rush your dog to the vet for but, it is a cause for concern---especially if it has been going on for a long time.

For your Golden Retriever, the inability to pass stools regularly and is typically what experts deemed as canine constipation. If your dog is able to relieve himself, the stools are likely to be hard, or your dog may pass mucus instead of stools.

Statistically speaking, your Goldy is likely to suffer from constipation at least once in his lifetime.

However, if it continues over time, it can even develop into a condition known as obstipation wherein the dog retains the hard fecal matter in the digestive tract which prevents him from pooping at all!

How Long Can a Dog Go Without Pooping?

As I mentioned earlier, most dogs poop once or twice a day and this depends mostly on the genetics and diet. 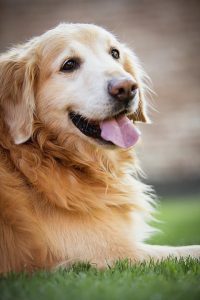 If your dog hasn’t gone potty in over 48 hours, you should take him to the vet immediately to know what the reason is. In most cases, constipation in dogs isn’t something to worry too much about and isn’t usually a symptom of a severe condition.

The Symptoms of Canine Constipation

If your dog hasn’t pooped for over 48 hours, that’s the biggest and the most obvious symptom of canine constipation of all. Other than that, following are the list of symptoms of constipation in dogs:

It is important that you consult your vet to treat constipation in your dog.

Keep in mind that constipation, in itself, can be a symptom of an even bigger problem. So, instead of treating your dog home, call the vet. Constipation in dogs can also be a sign of a serious condition such as:

The Causes of Constipation

The most common reason for constipation in dogs is there being a blockage in the digestive tract by something that’s not digested by the dog such as grass, bone, rocks, garbage, etc.

Another common reason in older dogs is not drinking enough water.

Other than that, following are some of the common causes of constipation in dogs:

Note that this is merely a list of common causes but, it doesn’t include all the possible causes. Taking your dog to the vet will be a good decision.

If your dog has been constipated for 48 hours, you can try to address it at home with some remedies.

However, if it has been over the limit, it is best to contact your vet.

Following are some of the things you can try to relieve constipation in your dog:

Final Words: How Long Can My Golden Rertiever Go Without Pooping

Your Golden Retriever can go up to 48 hours without pooping.

The lack of pooping is the biggest symptom of constipation in dogs which isn’t something very unusual for canines. However, you’ll need to keep an eye your furry friend and take him to the vet if he isn’t able to eliminate for more than 48 hours.

Constipation, in itself, could be a symptom of some bigger problem entirely. So, you shouldn't take it lightly and treat it as you would a more serious problem.

In the first 48 hours, you can try home remedies to help your dog relieve himself.

However, contact your vet immediately after the 48-hour deadline is crossed. After all, your pet would be so uncomfortable!

Still, have any questions or concerns? Let me know in the comments, and I’ll get back to you as soon as possible.