Did you know that large breed dogs are prone to getting GDV?

What’s sad is that not many dog owners know about this potentially life-threatening condition. This rapidly progressive condition is associated with large meals and causes your dog’s stomach to dilate due to gas and food and gets to a point where they can’t be expelled, the stomach twists and distend with gas.

In this blog post, I would like to go through everything you need to know about Gastric Dilation-Volvulus or GDV in Golden Retrievers in as much detail as I possibly can.

A Little Introduction to GDV

As I mentioned earlier, GDV is common in large breed dogs and, Golden Retrievers are categorized as large breed dogs so, you need to keep a close eye on your furry friend to ensure he’s safe.

The increase in the internal pressure in your dog’s stomach leads to the following:

It is important to note that the dog’s entire body suffers from poor ventilation which causes the cells to die in your dog’s body.

The Risk Factors: Which Dogs Are Prone to Developing GDV?

While GDV is not completely understood to this date, there are some risk factors that increase a dog’s chances of getting the syndrome. These include dogs that :

How Do I Know If My Dog Had GDV?: The Signs and Symptoms

In this section of the blog post, I will go through the signs and symptoms of of GDV and help you understand the disease better.

Following are the symptoms of GDV:

The symptoms aren’t limited to the list above but, if you do see any of these signs, you need to contact your vet as soon as possible. 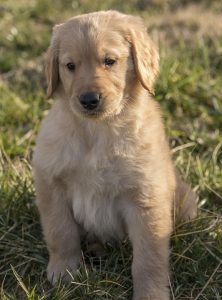 As GDV progresses, your dog will start to pant, have a bloated belly, be weak and may even collapse. If you get your dog physically examined, he’ll have an elevated heart and respiratory rates, have a poor capillary refill time, and a poor pulse quality.

It is important to note that stabilization and surgery work best when you perform them early.

There are certain secondary complications that also occur. These include the following:

What Are Some Common Causes of GDV?

In this section of the blog, we will look at some common causes of GDV in as much detail as possible.

The exact causes of GDV are unknown to this date.

However, there are various factors to blame which include:

Dogs that have a close relative with a history of GDV are known to be at a higher risk for the disease. Large breeds such as the German shepherds, great Danes, and poodles also are at risk.

While some puppies do get GDV, the chances of getting the disease increase with age.

Treatment of GDV: What You Ought to Know

Gastric Dilation-Volvulus is an emergency condition and it requires the dogs to be hospitalized immediately and treated as soon as possible.

In case your dog has cardiovascular problems due to the disease, he’ll need immediate care. After the dog’s heart is stabilized, gastric decompression is performed usually through orogastric intubation in which a tube is inserted through the dog’s mouth into the stomach.

After the orogastric intubation is completed and the dog’s condition is stabilized, surgical measures are taken to return the dog’s internal organs to their positions.

In case of organ damage, additional treatment is required.

In some cases a permanent gastropexy---a procedure in which the dog’s stomach is surgically secured to prevent future improper rotation---is done.

Since the exact causes of GDV are unknown, there are only a few risk factors that can be addressed. In this section of the blog, we will quickly go over them.

Following are some precautions to take:

GDV is a rapidly progressive condition is associated with large meals and causes your dog’s stomach to dilate due to gas and food and gets to a point where they can’t be expelled.

The exact causes of the condition are unknown, but following are the risk factors:

If you suspect that your dog has GDV, you need to take him to the doctor as soon as possible because the condition is often serious and can even be fatal.

Have questions? Leave them in the comments, and we will get back to you as soon as possible.