Home » Dog's World » The Many Colors of the Golden Retriever

When you think of a Golden Retriever you probably think of a typical rich golden color. In fact, you wouldn’t even think that they come in different shades unless you saw then side-by-side. But the truth is Goldens come in a range of shades from light cream to dark red. However, they are not all acceptable for showing.

According to the United Kennel Club, a Golden Retriever can be any shade of golden, as long as the color is rich and lustrous. Undesirable colors include those that lean more toward cream or red. The underbody and feathering may be lighter in color. Any white, black, or other color markings are not acceptable.

The American Kennel Club has a similar stance on what is acceptable. A rich, lustrous golden shade that is not too dark, nor too light. The hair on the feathers and underside can be a bit lighter. Noticeable areas of black, white, of other “off-colors” are to be penalized. 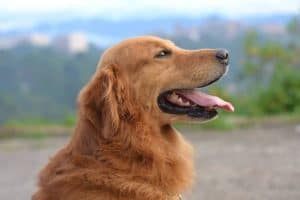 The Canadian Kennel Club is similar to that of the UKC and AKC as far as Golden Retriever colors are concerned. Shades of golden that are rich and lustrous. No white, accept a few hairs on the chest, which is acceptable but not desirable. Large areas of white, black, or any other undesirable color are not permitted for showing.

Between the three standards, we can see that only light golden, golden, and dark golden are permitted to show. Not cream, white, red, black, or anything crazy like that. It makes sense that a Golden Retriever should be, well, golden in color!

It is okay for a puppy to be a bit lighter in color. Many Golden Retriever puppies will get darker with age. So, it can be a sort of a guessing game when trying to determine the adult color of a puppy Golden. However, the ear color will give you the best idea of adult coloring.

You can find purebred Golden Retrievers that are light cream or very dark red. These could be puppies that inherited throwback genes. A good breeder is likely to sell them at a lower price because they are not suitable for showing. They may still be a well-bred Golden, however.

On the other hand, if you find a “Golden Retriever” that black, pure white, or a mixture of colors this is likely a poorly bred Golden. Well, either poorly bred or a mixed breed. If a breeder is trying to sell you a “white” Golden Retriever, find a better breeder. Albino creatures are likely to suffer from many more health issues than the typical animal.

Showable Golden Retrievers come in a variety of shades of gold. There are some shades of Golden Retrievers that are not acceptable for showing at all. These dogs can still make great pets, but you cannot show them at any major kennel club shows. The main colors that are acceptable for showing are light golden, golden, and dark golden. With golden being the most popular.