Bob, a resident of the state of Michigan, was watching some football on New Year’s Eve when he decided to get more wood for his fire. He didn’t plan to be out long, so he went to fetch the wood in his long johns, slippers, and a shirt. No coat or boots despite the cold weather.

A mere 15 feet from his home he slipped and fell on the icy snow. He couldn’t move his arms or legs after the fall. He began to scream for help. But, Bob, had little hope of being herd because he knew his closest neighbor was at least a quarter-mile away. Not to mention, it was 10:30 pm on New Year Eve.

He worried that no one would hear him, but he screamed for help anyway. Who came to his rescue? His loyal Golden Retriever, Kelsey. She heard his cries for help. She came over to him and layed on him, keeping him warm. She also added her voice to his, barking for help.

Kelsey kept Bob awake and alert, licking him and pawing his arms. It was like she somehow knew she needed to keep him awake. If she hadn't, Bob's body temperature would have fallen much faster. 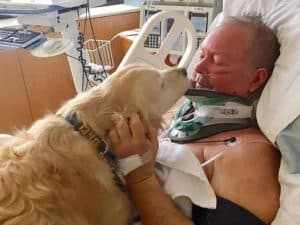 By morning Bob’s voice gave out and he no longer had the ability to scream for help. Kelsey, however, kept right on barking. Knowing that she had to attract help for her owner.

Bob knew it was his choice to stay alive so he fought as hard as he could. At around 5:30 am on New Year Day he told Kelsey “I gave it all I could give.” After that, he lost consciousness after 19 hours in the snow.

About an hour later, at 6:30 am, Bob’s neighbor, Rick, decided to come over and borrow some eggs for breakfast. As he approached Bob’s home he heard a shrieking howl. When he hurried to investigate he found that the noise was coming from Kelsey. He found Kelsey laying on top of her unconscious owner, Bob.

Bob has rushed the hospital. It was discovered that he had 3 herniated discs. Bob then underwent neurosurgery to repair his neck. The surgeons hoped that he would regain his mobility but they weren’t sure he would.

When Bob came to after surgery Kelsey was there to greet him with lots of licks! Their reunion after surgery was filled with joy and happy tears. One observer said, “it was everything you would have expected, tears, joy, and lots of licks.”

Bob’s doctors said that if Kelsey had not kept her owner warm he most certainly would have died. It got down to 24 degrees that night and he wasn’t really dressed for the occasion. But, Kelsey did a great job because there was no sign of frostbite anywhere on Bob.

Bob’s doctors have been impressed with his quick recovery. Bob has regained much of his mobility and continues to build strength with physical therapy. All thanks to his faithful Golden Retriever, Kelsey.