There's nothing like waking up to your dog's cold, wet nose sniffing your eye, right? Is that just me? Anyway, dogs have cool, wet noses. Is a dog's nose wet for a reason? Let's find out! 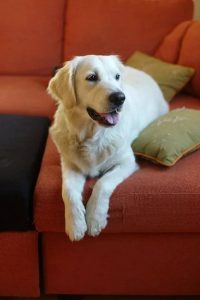 To help a dog smell even better the nose of a dog secretes mucus to cover the nose. This mucus helps to hold onto scent particles in the air. This, in turn, helps the dog be able to smell better.

It is also common for dogs to lick their noses in order to clean them. If some of their food or grass seed or a feather gets stuck, the dog will just lick it off.

Dogs will also lick their noses to taste the scent particles that are stuck on their nose mucus. When a dog licks his nose these particles get taken into the dog's mouth. Then the dog can use his olfactory organ on the roof of his mouth to further analyze the scent.

Dogs don't sweat through their skin as humans do. Dogs have only three methods of cooling themselves. They pant, they can sweat a bit through their paws, and their wet nose. The dampness of their nose evaporates and has a cooling effect.

It is normal for a dog's nose to be dry sometimes. Dog noses are often dry after waking up, in hot weather, if the dog is older, and if the dog has allergies. These are all pretty common.

However, a dry nose can be a sign of poor health. A dry nose may indicate dehydration, sunburn on the nose or windburn. Also, be sure to consult with your vet if your dog's nose is so dry that it is cracked, chapped, or bleeding.

Can A Nose Be Too Wet

Dogs can get colds and have nasal discharge. If you notice your dog's nose has a lot of discharge you may want to seek the advice of your vet. Your dog may be battling a cold, distemper, or have a foreign body in his nose. It's also a good idea to take your dog to the vet if your dog has a bloody nose that lasts more then a minute or so.

Between the mucus on his nose to hold smells and licking his nose to "eat" the smells. A dog's nose is wet to enhance his smelling capabilities.

A dog's nose can be wet or dry at times and either one can be normal. Excessive dryness or wetness could be a sign of health problems.