No quietness for Messico, where on 19th Sept. a violent earthquick scale 7,1  followed the previous one of 8,2 which caused the death of 98 people. 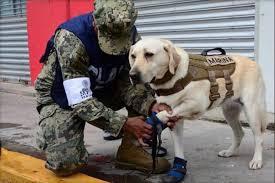 This time it happened south of country with an outcome of 293 killed persons and several damages to buildings.

Many firefighters were involved in a research operation, helped also by dogs, especially one already known and popular for similar events in the past.

Frida is the name of this labrador, 7 years old, wearing a mask to protect her eyes and boots in her pawns. She became the hero in Mexico. She belongs to the military force named Semar and is assigned to research duties and rescues in events of natural disasters. 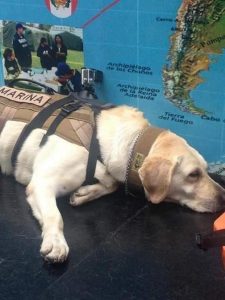 In total Frida already rescued 52 persons, of which 12 immediately after the serious earthquick. Twelve human lifes, twelve persons buried under collapsed buildings who can thank her if they have been found still alive.

Frida was the best among the others but she became very popular thanks to social networks and many users are suggesting to print her picture on the 500 pesos banknote in place of the one from painter Diego Rivera to whom Frida Khalo took her name, was very connected and dedicated her life.

After this tragedy, Mexico wants to go back to life and Frida can be the reason to be proud of and still keep hope high.